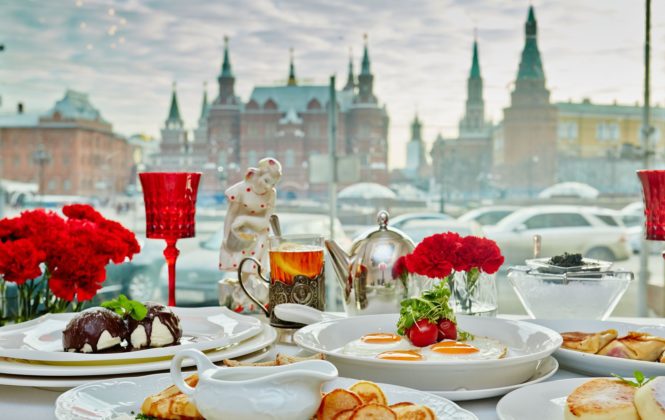 Moscow is undoubtedly one of Russia’s most exciting gastronomic destinations, it benefits from a broad spectrum of cultural influences. There’s so much choice, French, Italian and Oriental as well as restaurants inspired by Georgian, Azerbaijani, Middle Eastern and Soviet-era cuisine. Moscow has all it takes to surprise and enchant any adventurous foodie.

For Muscovites, eating out is usually a special occasion. Restaurants, bars and even ‘budget’ eateries invest in design and table service to impress guests with a unique atmosphere. Perhaps the most traditional Russian dishes are borsch (beetroot soup), pirozhki (pies), pelmeni (ravioli-like dumplings), and blini (pancakes). While we’re on the subject of blini, don’t expect those tiny ‘nouvelle cuisine’ imitations! Real Russian blini are just like the crepe style pancakes you’re used to at home, only nicer! Russians are accustomed to cooking and eating at home, but the restaurant scene here is also buzzing and growing. Even though there’s ever more demand for international dishes, many local chefs are going back to their Slavic roots and rediscovering traditional cooking. If you’re going on a food safari in Russia’s capital, prepare to be surprised by a wealth of quality and diversity. There’s everything from the fast-food joints you know so well to high-end a-la-carte excellence!

Novikov Group restaurants – To Muscovites, Arkady Novikov needs no introduction. He is the man behind the majority of the city’s most upmarket restaurants. Legend has it that he started out flipping burgers in a Moscow McDonald’s and caught the entrepreneurial bug.

Manti, a type of dumpling popular in Russia & Central Asia

Each of the Novikov Group restaurants offers impeccable service, flawless cuisine, and a unique design. The BOLSHOI restaurant will amaze you with Russian and European haute cuisine; the Sirena restaurant with the best seafood and a selection of the finest oysters; while Strana katory net (meaning Neverland) impresses with true homemade gastronomic masterpieces.

After a hard day’s sightseeing, we all want a good meal, and in Moscow, you are truly spoilt for choice with everything from fine dining...