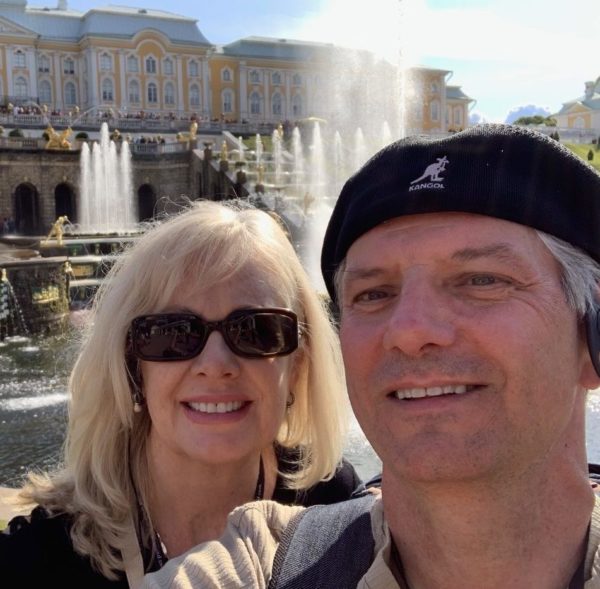 on their visit to Fabergé Eggs and the Fabergé Museum in Saint Petersburg, Russia

Story#4. Fabergé Eggs and the Fabergé Museum in Saint Petersburg

Of the 50 Fabergé Imperial Easter eggs, 44 have survived. On our trip to Russia, we saw nineteen of the forty-four. We saw ten of them when in the Kremlin Armory in Moscow (where no photography is allowed) and nine when we visited the Fabergé Museum in Saint Petersburg.

Where are the Fabergé Eggs

My wife has visited all of the U.S. Presidential Libraries. The viewing of all of the Fabergé Eggs may become another such quest. But through time, wars and other turmoil, the Eggs have been scattered throughout the world. Some are held in private collections, which would make this quest difficult. But isn’t that what makes a quest?

The remaining eggs are scattered:

Fabergé Eggs at the Fabergé Museum in Saint Petersburg

The Fabergé Museum is located in the Shuvalov Palace in Saint-Petersburg, Russia. It sits along the Fontanka River, near Anichkov bridge where there are statues of four horses and their horsemen.

The House of Fabergé, founded in 1842 in St. Petersburg, manufactured a wide range of items, from unique pieces made by order of the Russian royal family, European monarchs and Eastern rulers, to mass-produced goods (jewelry, silver utensils, and gemstone carving sculptures).

The peak of the creative work of Carl Fabergé, who headed the family business in 1872, is considered to be his Easter eggs with surprises inside, made to the order of the last of the Romanov’s – the Emperors Alexander III and Nicholas II.

The House of Fabergé created 50 Imperial eggs altogether. Each one of them took a year’s worth of work, starting just after Easter, and was barely finished by Holy Week a year later. Carl Fabergé personally delivered each new Easter masterpiece to the Tsar. Each new egg was striking for its novelty, the originality of its composition, and its virtuoso jewelry work.

The Imperial Eggs below are listed in the order they were made. Most of the photos are from our visit, except where better quality photos were needed!

Made in 1885, this was the first of the eggs delivered to Alexander III. The gold “yolk” was inside the white egg, and the gold hen was inside the yolk. Originally there was a replica of the Imperial Crown inside the hen, and a pendant inside the Crown. These last two surprises have been lost over time.

Made in 1894. Like the “Hen” egg this one was also made for Alexander III by Michael Perchin who worked for Fabergé. The surprise for this egg is lost. The picture below was taken at the Fabergé Museum.

Resurrection Egg (not an Imperial egg)

Made between 1884 and 1894. The Resurrection Egg is not considered an Imperial Egg, yet it is displayed in the Blue Room with the Imperial Eggs. There is a theory (link) that this egg was in fact the surprise in the Renaissance Egg (the one just above in this article).

Made in 1897. This was the egg I neglected to photo, as it was at the end of the Blue Room and had a crowd around it. The surprise is show in the photo; it is a replica of the coach that carried Tsarina Alexandra to her coronation.

Made in 1897. This egg is lost. But the assumed surprise inside is the heart-shaped picture frame in the photo below.

In the photo above of the Rosebud egg, the bright red back of this heart-shaped picture frame can be seen.

Lillies of the Valley

Made in 1898. The egg’s “surprise” are the three portraits that come out of the top under the crown. The portraits are of Tsar Nicholas II and his two oldest daughters. The photo below is one we took in the Fabergé Museum in Saint Petersburg.

Made in 1911, this egg is named for the fifteenth anniversary of the coronation. This egg has eighteen separate panels with 16 miniatures. Seven of the miniatures are portraits of the Imperial family and nine show events from Nicholas II’s life. For a really in-depth look at each of the panels, I recommend this web page. The photo below was taken at the Fabergé museum

Made in 1911 this egg was for a time known incorrectly as the Orange Tree Egg. The surprise is the bird that pops out of the top. The photo below was taken at the Fabergé Museum in July 2019.

Made in 1916. This was the last Imperial egg, made during World War I. The surprise, the photos under the emblems, are revealed when a small button is pressed. This is the last Easter Egg given to the Dowager Empress Maria Feodorovna and apparently the only Fabergé Egg that left Russia with its original owner. The photo below was taken at the Fabergé Museum in July 2019.

Below is a photo of the other side of this egg with the emblem down, hiding the photo.

The gift shop at the Museum offers a variety of Fabergé Egg copies. These are quite heavy, and all of them open and contain, as with the originals, a surprise.

The inside surprise is a bouquet of flowers that spins.

Fabergé Eggs at the Kremlin Armoury in Moscow

As part of our visit to Red Square and the Kremlin before we visited Saint Petersburg, we had a tour of the Kremlin Armoury. Our tour was before the crowds, so it was a somewhat dark and eerie place (yes, it was very cool!). In addition to carriages, weapons, armor and other items, there was one display case that contained a large number of Faberge eggs.

No photography was allowed inside the Armoury, thus the photos below are those taken by other folks….not sure how they got them but my hat is off to them! Where available attribution for the photo is provided.

Made in 1891. This bright green egg stood out from all the others in the display, in my view. Though there are other eggs in the Kremlin collection that are also mainly green, the Memory of Azov stood out. It is also the oldest in the Kremlin collection. The surprise, a replica of the ship of the same name, can be seen in the photo. The photo below is from Wikipedia.

Made in 1899. At the Kremlin. Photo below is from Wikipedia, attribution below. This egg was never sold and has been in the Armoury Museum since 1927.

Made in 1900. The surprise, which can be seen in front of the egg in the photo below, is a model of the train that ran on the Trans-Siberian railway (which would be a great way to tour the other parts of Russia!).

Made in 1902. When opened a monogram of the year and initials are on the rim. The surprise contained in this egg has been lost. There is an article in the Fabergé Research Newsletter from 2019 that has some interesting detective work on what might have been the surprise, worn in a photo of Empress Alexandra.

Made in 1906. From the Department of Redundancy Department – this is an egg on a replica of the Kremlin that is in a display of eggs at the Kremlin Armoury. The egg, which represents the Cathedral of the Assumption at the Kremlin can be removed. The Kremlin model also contains a music box wound by a key.

A photo of the Assumption Cathedral which the egg is patterned after, is below. This was taken on our Kremlin tour which included the Armoury and the grounds.

Made in 1908. The top of this egg flips open to show a model of the Alexander Palace. The model sits on a table. In the photo below this “surprise” is to the left of the egg. Alexander Palace is near the Catherine Palace in Pushkin, which is outside Saint Petersburg.

Made in 1909. This egg is currently in the Kremlin Armoury. This is one of the few Fabergé eggs that has never left Russia. The clear egg contains a model of the yacht named Standart, which was the largest yacht in the world at that time.

Made in 1910. Kremlin Armoury. Inside is a model of the statue of Alexander III on horseback.

Made in 1913. Kremlin Armoury. This egg celebrates the three hundred years of Romanov rule, from 1613 to 1913. It has 18 portraits of the Romanov Tsars.

Made in 1916. Kremlin Armoury. This egg was made of steel due to the lack of precious materials during World War I. The steel egg sits on four artillery shells. The portrait that sits on easel inside the egg shows Emperor Nicholas II and his son at the front during the war.

Kelch eggs at the Fabergé Museum

From the sign in the Blue Room at the museum comes this description of the Kelch eggs.

Seven Easter eggs were made by the House of Fabergé in the Kelch cycle from 1898 to 1904, with the first being the “Hen” egg and the last being the “Chanticleer” egg. These eggs were made for Varvara Petrovna Bazanova (wife of Alexander Kelch). Bazanova came from a very wealthy family of Moscow merchants, owning gold mines and a railway construction and shipping company. Kelch commissioned the seven eggs from Faberge for his wife.

Made in 1898. Photo taken at Fabergé Museum. Similar to the 1885 “Hen” Imperial Egg, this egg has a yellow yolk inside, with a chicken inside the yolk with the painting and easel inside the chicken.

Made in 1904. This was the last Kelch egg to be made. It is also, along with the Moscow Kremlin egg, one of the largest of the Fabergé eggs.

There is quite a bit more to see in the Fabergé Museum than just the famous Fabergé Eggs. Fabergé Museum is located in the Shuvalov Palace in Saint-Petersburg, Russia. It sits along the Fontanka River, near Anichkov bridge where there are statues of four horses and their horsemen. Our visit was part of the Volga Dream tour in July 2019.

The Museum consists of multiple rooms:

Below are photos from each of the rooms and some of the contents. Click on each photo to see a larger version.

Original source of the article and images: